For a very long time, and globally, women and girls shy away from science. Yet, our mothers, in one way or the other, practice science every single day. The limited recognition of local traditional activities, such as brewing and distilling alcohol as science driven practices, is due to the fact that the ownership of science has always been seen as a western idea rather than having its roots in ancient and modern Africa.

GoGirls ICT Initiative is a Juba, South Sudan based non-profit initiative founded by a group of dedicated young women in the fields of Computer Science, Information Systems, ICT4D Innovation, hacktivism and peace-building. Our mission is to engage, educate and empower girls. While involving schools and the communities where these girls come from in the areas of Science, Technology, Engineering, and Mathematics (STEM). We integrate STEM with the Arts (STEAM) in order to bring STEM education closer to young girls in South Sudan through an artistic and playful manner. In 2019, as South Sudan joined the rest of the world in the fight against COVID-19, and communities had gone into lock-down, GoGirls took a series of actions to directly respond to the needs of their local communities in the fight against the pandemic.

On a national level, recommendations, like washing hands with soap or using an alcohol-based sanitizer, had been put in place to help fight the spread of the disease. The outcome of this was panic, as we all rushed to the nearest pharmacies and supermarkets to get hand sanitizers, rubbing alcohol and disinfectants to keep ourselves and families safe. South Sudan, as a country, depends on imports from neighboring countries. We quickly noticed that the supply of hand sanitizers did not meet the demand and the prices were so high that they were not affordable for the average South Sudanese. Available products did also fail to meet the WHO recommendation of at least 65% alcohol content for an effective hand sanitizer. This resulted in a false sense of security from COVID-19 to those who used them.

With the aim to respond to those shortcomings, the GoGirls team embarked to produce higher quality hand sanitizers in order to help their communities. The team started searching for an existing laboratory in the country so that they could at least buy ethanol for use, but we did not find a laboratory that sold or produced ethanol. At GoGirls, we believe in sharing of open knowledge with stakeholders, so we reached out to the schools that were part of the science educators’ hackathon that led to the creation of the Open Science Framework for Classroom Experimentation, challenging them and the GoGirls team to come up with a hand sanitizer from locally available resources in South Sudan.

The science educators’ hackathon was organized and hosted by GoGirls ICT initiative in 2020 to find ways to improve feedback channels between curriculum developers, policymakers, teachers and learners or break stereotypes of girls not taking sciences. During this session, three key discussion points took center stage, such as;What Innovative #OpenScience approaches can be used to conduct Science experiments in Primary and Secondary Schools?, how can Science Educators, Schools and Institutes of Higher learning collaborate to bridge the gap between theory and experiments related to science? and how can science teachers improvise with locally available materials /resources to overcome the challenge of limited or no available materials for conducting experiments?

As usual, the team of teachers, who were chemistry and biology experts from these schools, were all male except the GoGirls team who were female. The GoGirls team pondered on how women could gain more agency, and take on leading roles in the research and development process of the hand sanitizer.

It was during the pondering on how to better integrate women that it came to our realization that there is a large community of female brewers in South Sudan who have been brewing an alcoholic drink and who made a livelihood out of its sales. Through the male teachers, we connected with these local female brewers and organized a joint one-day capacity building session on how to distill highly concentrated alcohol for making hand sanitizers in one of the schools. It was through this session that we came to learn the kind of ingredients the women use in making their alcoholic drink. This included the spices or fruits they use to mask the smell of the strong alcohol, the right measurements of ingredients they use, for how long they ferment before they make the alcohol, the time they normally distill their alcohol and the kind of temperatures they maintain when distilling. Based on this knowledge -shared by women for women, the GoGirls team was able to make decisions on how to move forward with the production of a hand sanitizer that would help their local communities. They decided what they would use, such as orange epicarps as an oxidant, and when they should be added to the brew before they distill. They were enabled to distill highly-concentrated alcohol (Ethanol), above 80%, that can be diluted with other reagents to 60% and be used as a hand sanitizer.

That’s how the female brewers, together with the GoGirls team, were able to produce a hand sanitizer locally. These local female brewers are producing their alcoholic drinks based on methods and traditions that have been handed down to them from their ancestors, directly from their mothers and grandmothers over generations. These kinds of methods and productions are upheld over generations because they demonstrate reliability.

Without their locally embedded contribution, the intention to solve a local lack of crucial hand sanitizers through local production wouldn’t have succeeded. During our engagement with the female brewers, we didn’t face any resistance from them and this is due to the fact that we have been collaborating in an engaged co-creative manner, in which they have been part of the entire process of producing the ethanol.

Since South Sudan lacked any laboratories in which we could handle our product, the team opted for methods such as combustion analysis that is, an alcohol sample is weighed and then burned in a furnace in the presence of excess oxygen to test the percentages of the alcohol produced by the women in comparison to the industrial ethanol provided by one of the schools during this experimentation phase. This was done on site, in GoGirls office or in Juba Day secondary school laboratory. It’s such open collaborations that advance Citizen Social Sciences. Bringing a new product to the local market is exciting, but entails the challenging step to gain trust of its potential. To build trust with the potential target customers, the GoGirls team distributed their first sample of the product to different individuals for free to get their feedback. We also reached out to the South Sudan Bureau of Standards (SSBS) for certification of the hand sanitizer brand in South Sudan. However, the fact that the SSBS was not involved from the very beginning of this research process created a gap, as they couldn’t understand which kind of ethanol we were using. We had to re-do the entire process of producing the Ethanol and making the hand sanitizer with them. After clearly understanding our process, the Gosanitize, hand sanitizer brand has been certified and approved for official sales in the South Sudan market, like any other product by SSBS, as it meets all the requirements of the industry. Based on this experience, the SSBS changed their perspective on locally distilled Ethanol.

However, new obstacles also arose. With the product approval, the Bureau of Standard requested to inspect the Laboratory/space where the production process  place. Unfortunately, such a space didn’t exist for GoGirls. But we mobilized resources to acquire a shipping container that was modified to a laboratory space. With the support of the Bureau of Standards, they recommended the kind of equipment that we need in this laboratory to aid the production of hand sanitizers.

Furthermore, the Bureau of Standards raised the question of the safety of the local female brewers, since they are producing highly concentrated and flammable alcohol. Based on this, GoGirls team, together with an expert from SSBS, held a peer to peer virtual exchange with Bibliothèque-MboaLab, based in Cameroon, to learn from their sanitizers’ production methodologies and in order to understand how they are addressing the question of laboratory member safety in their lab.

Bibliothèque-MboaLab is a lab committed to educating, transforming and positively impacting the lives of the Cameroonian people through its DIY (Do It Yourself).

In another session, the GoGirls team, together with our local female brewers, held a capacity building workshop to learn from each other on which safety precautions they have normally in place when distilling alcohol. The team was able to document these practices, adapt them to the South Sudanese contexts, and present their safety plan to the Bureau of Standards for approval. The Bureau accepted them as Standards of Operation (SOP) for the brewers and the team.

Today, Gosanitize is legally recognized as an independent entity and a social enterprise under the constitutional laws of South Sudan authorized to produce hand sanitizers, disinfectants, rubbing alcohol and ethanol for schools. Through this laboratory, students, both boys and girls, from three schools within Juba have been able to test their science theories practically. 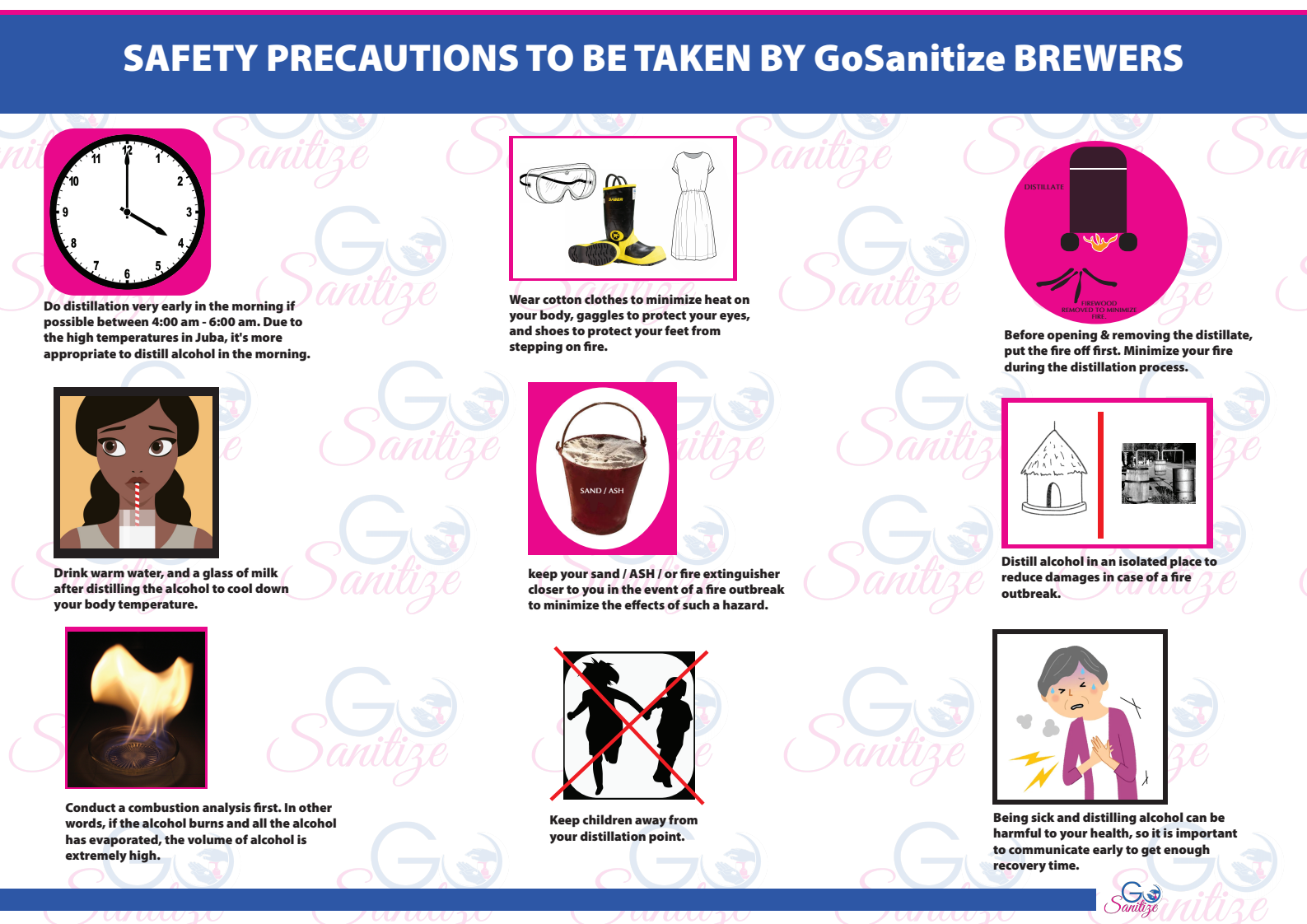 Have you ever wondered what role Citizen Social Science plays in bringing Science back to its ‘original owners’? The different approaches applied in this research by GoGirls ICT Initiative is a clear reflection of science being more social and open than we think. A key element needed in driving STEM education.

This website uses cookies to improve your experience while you navigate through the website. Out of these, the cookies that are categorized as necessary are stored on your browser as they are essential for the working of basic functionalities of the website. We also use third-party cookies that help us analyze and understand how you use this website. These cookies will be stored in your browser only with your consent. You also have the option to opt-out of these cookies. But opting out of some of these cookies may affect your browsing experience.
Necessary Always Enabled
Necessary cookies are absolutely essential for the website to function properly. These cookies ensure basic functionalities and security features of the website, anonymously.
Functional
Functional cookies help to perform certain functionalities like sharing the content of the website on social media platforms, collect feedbacks, and other third-party features.
Performance
Performance cookies are used to understand and analyze the key performance indexes of the website which helps in delivering a better user experience for the visitors.
Analytics
Analytical cookies are used to understand how visitors interact with the website. These cookies help provide information on metrics the number of visitors, bounce rate, traffic source, etc.
Advertisement
Advertisement cookies are used to provide visitors with relevant ads and marketing campaigns. These cookies track visitors across websites and collect information to provide customized ads.
Others
Other uncategorized cookies are those that are being analyzed and have not been classified into a category as yet.
SAVE & ACCEPT
Powered by